How do you treat the “Yesterday” type emergencies
29 Jan 2015

What is an emergency for you? A situation that cannot be postponed? That must be dealt with as soon as possible once one becomes aware of it? Your answer will probably be affirmative. And I agree with you, and so your colleagues, relatives, manager etc. However, how many of the situations labeled as “urgent” are really urgent? Imagine that the technology that surrounds you, the professional experience you achieved, the options at your disposal, the ability to anticipate, are all tools at your disposal specifically for you not to be a person chased by a “speedy zombie full of nitro”. However, the availability of the options described above can produce a smaller or bigger obsession or addiction on the subject of solving the problems one is confronted with in a faster manner instead of a better one? Moreover, can managers who are unable to deal with their inability to organize, coordinate, improvise, plan and predict etc. pass on their own behavior to the persons they coordinate, regardless of the latter’s abilities and faults? You guessed right, they do!

The word emergency (or urgent) is pretty much a constant at the work place, being uttered in the morning, during lunch break, in the afternoon, when you get home and a colleague calls you, before going to bed, at 2 in the morning and so on. This epidemic of “urgent situations” expressed by “this situation must be solved yesterday” has expanded so much during the past 10 years that nowadays it is present in small, medium, large and very large companies. The organizational dimension and its principles no longer matter, the epidemic is integrated. Very adaptable, isn’t it?

How does this epidemic take form every day at work?

1. By not prioritizing the tasks (a manager and his team, for example, throw themselves first thing in the morning into the e-mails before establishing the priorities of the day. Someone might argue that there are always new priorities on the emergencies list and it should be continuously updated so a meeting with all the colleagues in the department first thing in the morning would be futile. That someone might be right, however, regardless of whether you add one or more activities on the priority list, at least you have the opportunity of monitoring which priorities are on stand-by, which were postponed, which are being done, which are finalized and so on. On the other hand, if you don’t start with a list, you will most likely end up with post-it notes all around the desk which will be an encumbrance or with folders on the desktop which will seem like infinity of double-clicks in search for a file. So, 15–20 minutes in the morning, devoted to establishing the priorities of day x is well spent time. Imagine what it would be for a soccer team not to have their positions in the field set before the game, and the coach would say: Take whatever positions you like in the field, but it is urgent, vital, to win the game! Can you notice how the coach is concerned about the urgency and not the strategy? A real manager, will not focus only on the consequences of a potential failure, but foremost on establishing a strategy which will enable him to predict a possible outcome and, in addition to that, he can also have a plan for improvisations in case there are unforeseen situations while implementing the strategy. 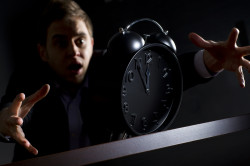 2. Defective communication or complete lack of it between colleagues, clients, suppliers. One might wonder how is it that in 2015 there are still people applying for a job who do not receive an answer (regardless of its nature) from the HR consultant who interviewed them. Why are there so many e-mails that never get a reply? Should we be amazed that there are orders that cannot be delivered or unreliable suppliers? We are talking here about lack of communication or defective one. In other words, the e-mails are superficially sent only with an ASAP in the subject line and a very short content because “everybody is in a hurry and they have better things to do than to focus on a two-bit e-mail”. Advanced communication devices, if not dealt with in a serious and responsible manner, can damage your company or work group. Any communication channel can help if you don’t disregard it, if you don’t treat it just like a simple online instrument or as a communication method to which anybody has access anyway. Just think about how everybody walks on the street, does that mean you don’t have to pay attention when you walk on the street? That’s how communication methods are.

3. It is cool for a situation to be urgent…

Weird? Abnormal? Trendy? Whatever you want… Urgent, however is apparently so cool that a manager or an employee who has only a few responsibilities but doesn’t know how to accomplish them gets quickly into a state of panic and suddenly his need of solving something unknown to him becomes urgent, but it’s not the situation itself that’s urgent. So, the schizophrenia of emergency represents a means that encourages procrastination (postponing responsibilities for later, tomorrow, two weeks from now… I forgot about it, bam! It’s done!)because managers, employees etc. waste too much energy communicating that everything is urgent and at the end of the day one can see that responsibilities, or at least some of them, had been superficially treated.

4. Fear to invest in employees and their potential because of losing money. 2015… 2015… 1320… 1320. Yes, it’s 2015 but vanity, lack of professionalism, or fear of honest competition are still present in organizations just as they were decades ago. Certain employees are denied organizational and financial promotion because they might take the manager’s place or can be taken over by the competition. Moreover, certain employers offer small wages to certain employees who, by not being financially motivated, will not give their best, even in an urgent situation… Thus the employer loses the money they could have earned from the clients simply because he is unable of financially motivating his team. Fear of investment causes panic, employees can live under some sort of financial terror thus any activity can become urgent, and the employees never get any breaks.

5. The speed around you.

How much does the speed around you slow you down? Have you ever wondered about how when you try to be fast you lose your coolness, ration, prevision? Sometimes to act normal is, in fact, fast. Think about this for a while…

6. Other causes: Chaotic or hasty management, unauthentic, over familiar and not too professional and objective, broken promises, money rush with disregard to services offered to clients, high quantity and low quality, lack of training, lack of experience and so on.

HRS invites you to consult the list of tests which exists in its portfolio. All tests are licensed by the test provider - Test Central.   There...
27 Jul 2020 Read more
We invite you to complete this questionnaire in order to obtain a statistic of interest regarding the non-reimbursable funds. Completion time until 30 seconds. Thank you! http://docs.google.com/forms/d/e/1FAIpQLScr1CTRbvm405xihuyoDBAj-LjwKNKqOe0npb5uEuYEkzhh7A/viewform?vc=0&c=0&w=1
25 May 2020 Read more
Firma Marcu Biomass Energy SRL, din orasul Cazanesti, dezvoltata prin fonduri neranbursabile cu activitate de Realizare si comercializare a brichetelor din deseuri vegetale (paie) si-a propus sa...
14 May 2020 Read more
This website uses cookies to improve your experience. We'll assume you're ok with this, but you can opt-out if you wish. Cookie settingsACCEPT
Privacy & Cookies Policy